The biggest thing about Friday though, was something we LEARNED...

Watch this documentary (free until March 31): Hungry for Change - you will be inspired and enlightened! Bruce and the kids watched it on Friday during the day, and I watched it at the Olds Library with friends on Friday night...Our entire family was moved to make some serious changes.

As many of you know, for Lent, my family and I decided to remove refined sugar from our diet. This has led to a discovery of how much sugar is in EVERYTHING we eat. As such, we've been eating more healthy choices. This movie was the final push to make this a permanent choice. Even my kids have noticed that the sugar makes them feel sick (they both went to birthday parties over the past month of lent and discovered that they really didn't feel good after trying to eat cake and such...) Personally, I have lost 10 lbs so far and feel MUCH different.

So, the movie prompted us to decide to eat more raw foods and get rid of the white sugar, white flour or anything that has more than a couple ingredients! Whether that be salads, smoothies, juicing or just plain munching on good stuff!

Day 6 - Saturday, I pulled everything out of my fridge and evaluated: 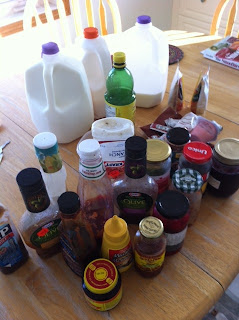 This was the door. Notice the sauces and salad dressings and even lemon juice. The dressings will get finished up (they are mostly vinaigrette) and then we'll make our own from fresh ingredients...and the sauces...well, they are gone. Look at the ingredients: 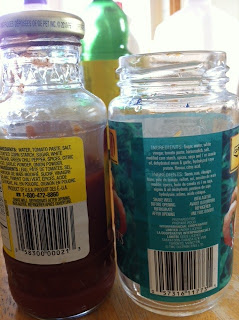 Sugar, preservatives, BLECH!!! The ketchup and HP will get used up and not replaced (I don't want to be too wasteful) I ended up getting rid of several sauce jars and the dressing that was almost gone anyway (thus the upside down bottle) I used up the last of the lemon juice, so it won't be replaced again either.

Then the inside of the fridge: 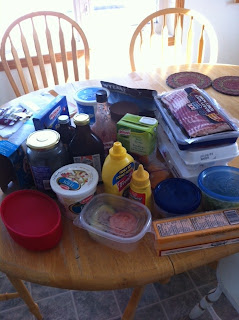 More mustard, some pickles, hot sauce, broth, various cheeses, some leftovers, yogurt, eggs & bacon, my husband's beer yeast. Our magnesium and Uzo's Oil are there as well. I let go of one of the mustard (camping leftover that was lost at the back) We are going to buy and eat a lot LESS cheese...less dairy period. The bacon will get used up and then we will take a break from it for awhile. My husband especially eats it every day. The broth will get used up and I'll make my own. Eggs, we will continue to have in various forms. I got rid of some really old fondue cheese (I didn't even open it, I was scared to!)

This is the food from the produce drawers - not too bad - we've been eating a lot more it already... 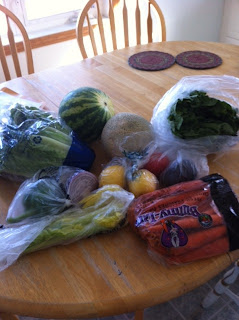 After the big cleanout (which took 1 1/2 hours - pretty good I think because I washed everything down). Rebecca and I went grocery shopping. We discovered a juicer on sale...Universe is at it again. We'd been thinking about it from the movie and there it was. We actually added that to our house inventory. I'll have to find something to get rid of now instead! :)

After our grocery shopping: 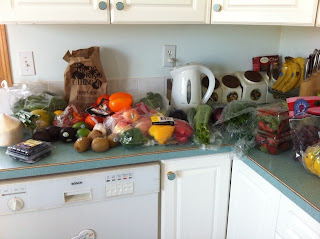 Note: there are no "boxed" items...they pretty much have sugar and preservatives! Look at all the colors! I washed everything and put it all away in the newly cleaned fridge. We've already eaten a ton of produce - we've used the juicer, had two salads last night and made smoothies this morning.

ITEM#1 - old phones and our land line
ITEM#2 - store bought sauces and other unhealthy foods (I also got rid of leftover cake that was in the freezer - we were saving it, but we won't be eating it now)

I have big plans for today, Day 7 - I'll try to get a post up tonight!

Cheers to healthy eating!!
Posted by Shawna at SLC at 10:07 AM